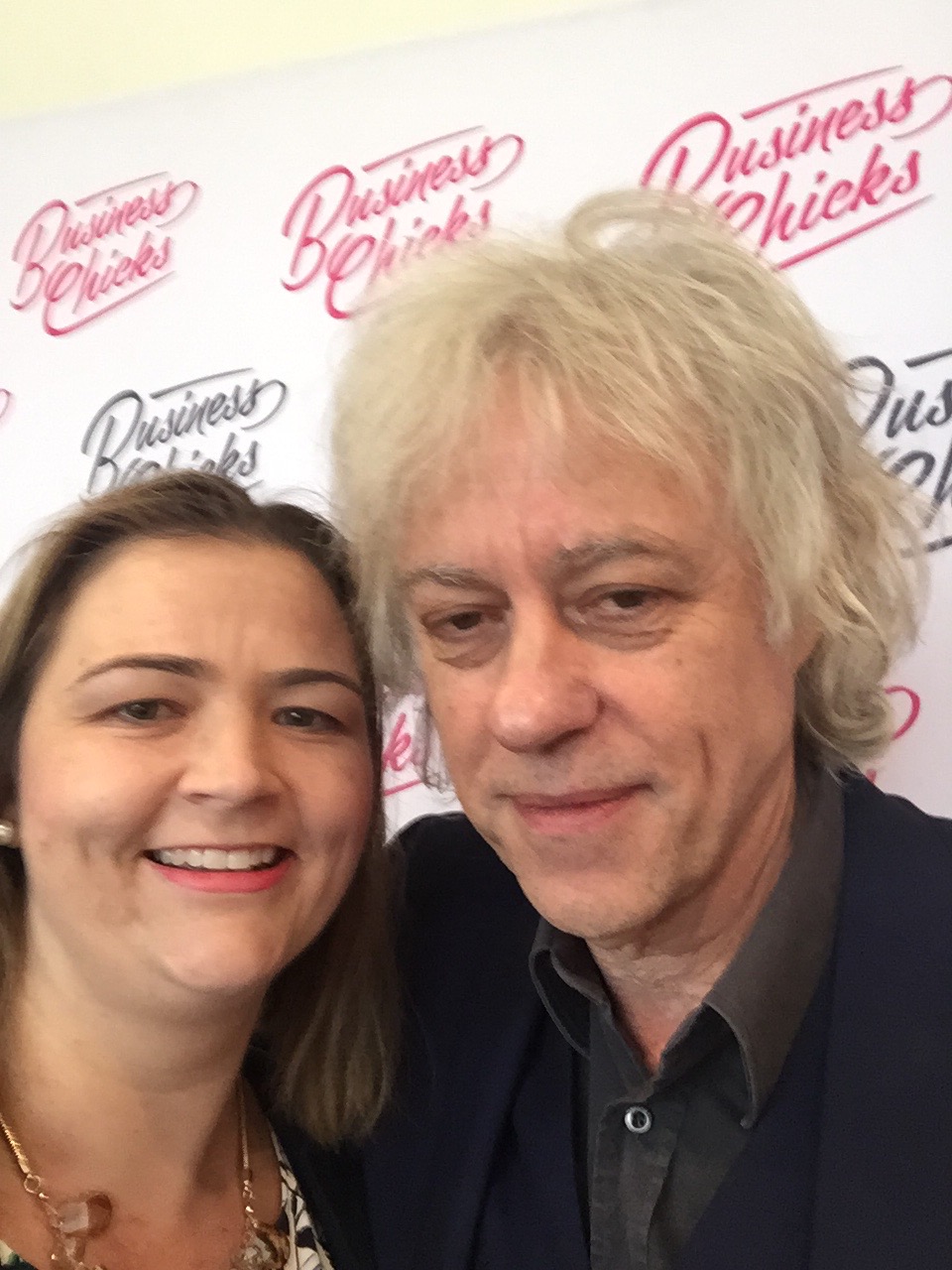 You may remember him fromThe Boomtown Rats, he starred as “Pink” in Pink Floyd’s film, Pink Floyd – The Wall, he co-founded the charity group Band Aid and later Live Aid and the Live 8 concerts. Raising more than $150 million for on the ground relief work in Africa, he also received a knighthood and is the recipient of the Man of Peace award which recognises personalities from around the world who have made an outstanding contribution to international social justice and peace.

I met Sir Bob Geldof at a business women’s breakfast event and I was fortunate to speak briefly with him one-on-one after his speech, but more on that later.

He went to the stage with a real rockstar entrance, he was the coolest of cats – stylish, relaxed and present in the moment. But his message was far from relaxed. I took out my little notebook and began furiously scribbling notes as he spoke. Sir Bob spoke of this century, the last century, a little about the century before that and what sense to make of the now. He said, “I don’t want great grandchildren coming to me and saying, “Were you aware in 2015? How could you not have been aware, given what was happening, given the tensions of the world, given the great equalities in the world…How could you not have seen that something was going to kick off?”.

The First World War
It has been 100 years since the first world war. He asked his Aunt Fifi before she passed away at the beginning of this year at the remarkable age of 106 what she remembered at the age of 5 when the First World War began. But she could not really recall. It was like she grew up in a lacuna where there were no generations of children in front of her. Her generation was really looked after because there was so much devastation before her of young adults in the war, and there was not really any young ones around.

The existential threat of the bomb was in the front of his mind when he young. But he says, “We still live with that threat, but we don’t really consider it as much now”.

The Twenty-First Century
And what are to make of this century? He says, “I don’t feel that the 21st century has begun”. He posed the question “Has this century really started yet?” Sir Bob looked to the past to see what could be applied to make sense of what was going on in the world now – in Paris, in Beirut and elsewhere.

Sir Bob considers that the internet has been the central invention of our life time. It had been integral in pulling China out of poverty through trade, it has seen the collapse of countries and high unemployment such as the young men of Spain. But also, “the internet has given voice to the previously mute.” We have only just began to scratch the surface of this relatively new internet phenomenon and we can see how much the world has changed already in only the past 25 years because of it.

Action
He referred to the German poet, Goethe: “Whatever you can do or dream you can, begin it. Boldness has genius, power and magic in it.” Sir Bob challenged:

“Well, ladies and gentleman, genuinely in my life, I have never felt such a need for genius, certainly power, but above all, we desperately need some magic at the moment.”

When Sir Bob has dared to dream and taken bold action, he has produced powerful, genius and magical results. Because of my interest in family law and the interests of children, the work that stands out most to me is his work as the single father. Daring to do what he can, dreaming what he can and to beginning it.

Geldof Custody Battle
Sir Bob and his family endured a custody battle in the 1990s. He was not successful in obtaining his desired outcome of a 50/50 shared arrangement. Not having his three daughters in his daily life would have been life-changing. His own parents had not separated, but his mother passed away when he was about 6 years of age and his father became a sole parent. Being raised by his father, Sir Bob would have thought that he was more than capable as a father in caring for and raising his children. His life entails a sad history of sole parents. Even now, tragically, his grandchildren, the children of Peaches Geldof, his second daughter, will live without their mother as she passed away in 2014 when her two children were under the age of 2.

A family court battle is not a fate that should be wished on your worst enemy. And no matter the outcome, there are no real winners. Even though it was a horrible experience for Sir Bob, he has used this opportunity to talk about the experience of separation. When he spoke of his experience on Parkinson in 2001, he said he never received so much mail. People had known him for over 30 years through his work as a musician and through his enduring work for charity and peace. Now that the world knew about his struggles as a parent, he received what amounted to about 70 plastic bins full of letters.

Even though he lost the court battle, he used the opportunity to help others by drawing attention to what was happening and the effect on families on a day-to-day basis. There was a ripple effect across the world. For example, in Australia, there were changes in the Australian family law legislation in 2006 which included a requirement of courts to consider equal time or substantial and significant time with children when the parents have equal shared parental responsibility.

What to do?
As history unfolded, Sir Bob’s later became the primary carer to his three daughters, and then also to the daughter of his then late former wife and the late Michael Hutchence.

The late Peaches Geldof recalls father’s mentality was to “keep calm and carry on”. It would seem that his message stays strong today and applies to broadened circumstances.

I was fortunate to speak briefly with Sir Bob one-on-one after his speech about families and separation. I am passionate about helping families who experience loss or reduction of time with family members for whatever reason. Sir Bob told me:

“Keep going with your work for parents and children. There is much help needed.”

Whatever unfolds in your life – the good times and the trials and tribulations – they are all part of your experience and can be used to help another. As Sir Bob said in the words of Goethe:

“I have never felt such a need for genius, certainly power, but above all, we desperately need some magic at the moment.”

Sir Bob Geldof has been so inspiring, and I feel compelled to also ask:

What genius, power and magic can you add to the world?

About the Author: Claire is passionate about helping children and families going through divorce as a child custody mediator. In addition, she is also a divorce lawyer for mothers and fathers in property matters and also acts for children as an Independent Children’s Lawyer.