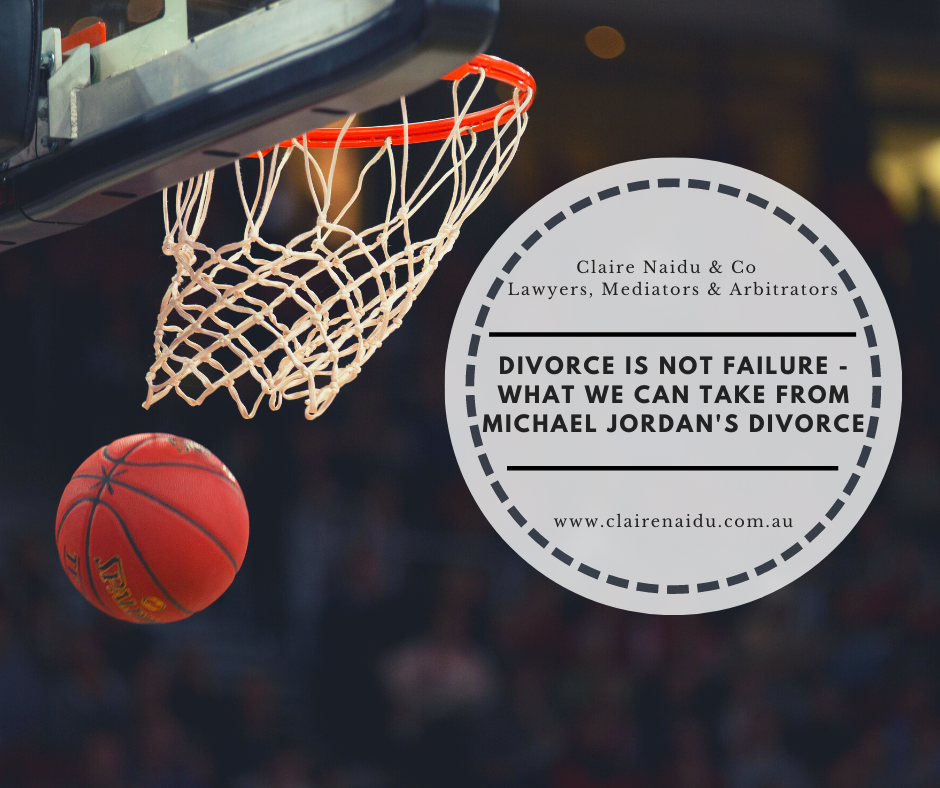 DIVORCE IS NOT FAILURE

You do not have let your separation or divorce be viewed as a failure.  It is important that if you do make the decision to separate, that you do not let that hold you down or feel like a failure.

Michael Jordan,  was an American basketball player who was the first athlete in history to earn over $30 million per year in salary.  He is now a retired professional basketball player but is also an entrepreneur, team owner and product endorser.

Failures are not failures

Despite his many ‘failures’ in life, he does not let this be what defines him.  In fact, through the failures, he becomes what he wants to become.  The focus is not really about his failures, but what comes from these failures.  This is most obvious in his professional career.  But it also expands to other areas of his life as well.

Separation is not failure

An example of where Michael Jordan has does this elsewhere is in relation to his divorce settlement from his wife of 17 years.  He did not let his significant divorce settlement get him down financially, despite being one of the biggest payouts in history.

Michael Jordan’s former wife, Juanita Jordan (now Juanita Vanoy), filed for divorce in January 2002, but they both announced a month later they were trying to reconcile and Juanita withdrew her divorce petition.

They remained together for a period of time trying to work on things.  They were not able to and they jointly agreed to file a petition for divorce in 2006.

Notwithstanding the divorce and notwithstanding that Michael no longer plays Basketball professionally, his net work has continued to rise.  It is thought that by the end 2006, he was worth about $450 million, after taxes, divorce settlements, living costs, and other expenses.

So what can we take from all of this?

If you want to separate but are not sure if you should do so  – try working on the relationship.  It is definitely worth trying to make things work if that is possible.

If working on the relationship or reconciliation is not possible?

If working on the relationship as a couple is not possible, you can both make a joint application to settle your property matters and apply for a divorce.  While a divorce does not have to be amicable, it will usually result in a quicker and more expedient settlement.  Why is this good?  Well, you are likely to save much more on legal fees if you can reach an amicable settlement rather than fighting through the Courts.  Also, and a very important one, Freedom!

Once you finalise property matters, then you are free to do what you want with your settlement.  The other person is responsible for their part of the settlement monies that they receive and do what they want with it.  You are free to move on with your life and create what wealth you want and not have your ex-partner share in your wealth.

In most jurisdictions there are certain time limits that apply.  If you are considering separating, obtaining a divorce, and/or would like to arrange a property settlement, you should obtain legal advice to make sure your interest are protected including finding out about any time limits that might be applicable to your matter.

Advice for your particular circumstances

Note: This article does not constitute legal advice and Claire Naidu & Co is not responsible for any reliance upon its contents.  If you would like specialist assistance and would like to know what options might be best for your situation, contact Claire Naidu & Co.