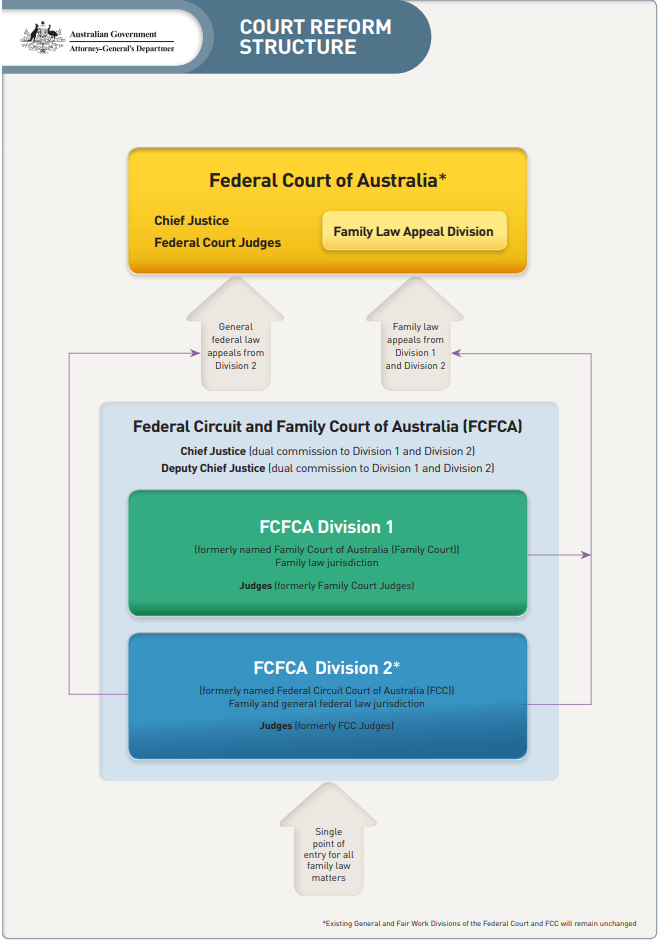 The following is overview of the structural reform of the Family Law Courts in Australia.  The fact sheet has been prepared  by the Australian Government Attorney-General’s Department.

The current court structure and overlapping family law jurisdiction between the Family Court and FCC leads to
significant inefficiencies, confusion, delays, additional costs and unequal experiences for many families. This
results in poor outcomes for some children and families. The reforms will address these inefficiencies.
The establishment of a single new court will create a consistent pathway for Australian families in having their
family law disputes dealt with in the first instance. The reforms are designed to maximise the use of highly
skilled and trained judicial officers, and court resources, to significantly improve access to justice for Australian
families; improve the efficiency of the family law system; reduce the backlog of matters in the family law
courts; and drive faster, cheaper and more consistent resolution of disputes for Australian families.
Structure of the FCFCA

The FCFCA will be divided into two divisions. Division 1 will comprise the existing judges of the Family Court,
and Division 2 will comprise the existing judges of the FCC.
Division 1 of the FCFCA will deal only with family law matters, while Division 2 will deal with both family law
and general federal law matters. The FCC’s existing general federal law jurisdiction and fair work jurisdiction
will not be impacted by the establishment of the FCFCA, with no changes to the existing appeal pathway. The
current Fair Work Division of the FCC will be retained in Division 2 of the FCFCA.
There will be no changes to jurisdiction or operation of the High Court of Australia, the Family Court of Western
Australia, or other state and territory courts that deal with family law cases.

Operation of the FCFCA in family law matters
The FCFCA will have a single federal point of entry for all Australian family law matters. Urgent and high risk
cases will continue to be prioritised, and each case will be allocated at the earliest possible point to the
relevant judge and division with the right expertise and capacity.
Additionally, the FCFCA will operate under the leadership of one Chief Justice with the support of one Deputy
Chief Justice, who will each hold a dual commission to both Divisions of the FCFCA. The appointment of a single
Chief Justice and Deputy Chief Justice allows for more effective allocation of cases between the two Divisions
and enables the FCFCA to operate under a common case management process, resulting in a more efficient
and consistent handling of family law matters.

By adopting a common case management approach across both divisions, families will know that their disputes
will be dealt with by the FCFCA as a whole, enabling information to be readily available about what to expect
and when, thereby standardising the experience of litigants, and providing an early sense of the likely cost
implications of lodging a family law application upfront.
Handling of appeals

A fundamental change in establishing the FCFCA will be the removal of a substantial part of the appellate
jurisdiction of the Family Court, allowing considerable judicial resources currently used to hear appeals to focus
on hearing first instance family law matters. This will contribute to the new court being able to hear more
matters each year, reduce the backlog in first instance family law matters and contribute to reducing median
case waiting times.

The FCFCA will retain jurisdiction to hear appeals on family law matters from State and Territory courts of
summary jurisdiction. This appellate jurisdiction will be extended to both divisions of the FCFCA.
All family law appeals from the FCFCA (and some appeals from the Family Court of Western Australia) will be
heard by the new FLAD of the Federal Court. There will be no changes to the rights to appeal as currently
provided for under the Family Law Act 1975.

Timing of reforms
The Government expects to introduce legislation in the Spring Parliamentary sittings. Subject to passage of
legislation, the FCFCA and the FLAD will commence operation on 1 January 2019.
Initially, the Federal Court and both divisions of the FCFCA will maintain their existing court rules. Following
consultation with the judiciary, legal profession and other stakeholders, the new court will update its rules with
a view to achieving consistency in forms, procedures, administrative matters and practice directions.
Transitional arrangements will be put in place for proceedings before the courts at the time of the
commencement of the reforms to ensure that matters before the courts at that time are dealt with as
effectively and efficiently as possible, and with the minimum of inconvenience and delay. Further information about the reforms is available on the Attorney-General’s Department website
(www.ag.gov.au).